NYMF is an international fashion brand from Estonia with a mission to inspire women to rediscover their power by speaking the magical language of dresses.

With her latest collection, designer Triin Kärblane gives women an opportunity to truly experience the power of their inner goddesses.

NYMF will open up its portal on the stage at the Milan Fashion Week to invoke a whole specter of goddesses for the spectators to marvel at. Each dress represents an aspect of a goddess, has its own character and purpose, which gives it a magical power to unveil the divine qualities within every one of us.

The audience gets to witness a metamorphosis of a nymph who has been hiding from the world for a long time but now transforms into a fragile yet all-powerful dragonfly. This change further illustrates the transformation of the brand itself in recent years. Dragonfly symbolizes a messenger and a guide between the two worlds – the visible and the invisible, the real one and the illusory one. But which is actually which?

The collection combines iridescent unworldly elements with worldly ones, intertwines feminine traits of softness and fluidity with rustic power, and serves as a bridge between the mysterious moon and the all-illuminating sun, resulting in a perfectly balanced and harmonious whole.

NYMF brings out the invisible goddesses. Both on stage as well as within every woman. 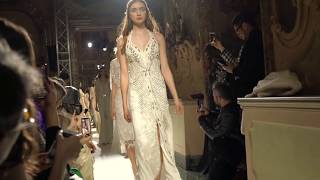